The Latest Continuing Jobless Claims for the Week Ended July 10

The Latest Continuing Jobless Claims for the Week Ended July 10 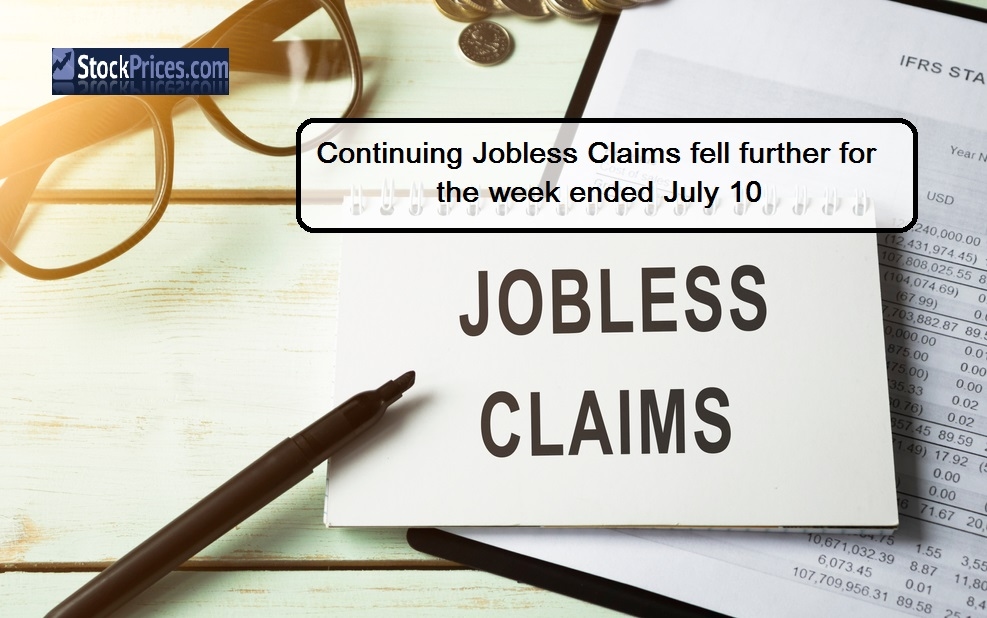 Such a level was last reached on March 14, 2020. That was just after the pandemic declaration. Administrations across the nation had directed companies to shut down temporarily. The decision had led to more than 20 million people lining up for unemployment.

On the other side, weekly jobless claims jumped unexpectedly last week. In contrast to anticipation, the nation's labor market is set for a robust recovery going into the fall.

For the week ended July 17, the level for unemployment insurance initial filings was 419,000. This is higher than the level of the last period, which was upwardly revised to 368,000. It is also much higher than the Dow Jones estimate of 350,000. The Labor Department reported this on Thursday.

The report resulted in stock market futures getting off their highs for that morning. The markets opened a little negative. Government bond yields also got a little lower.

This jobless level was the highest weekly mark since May 15. It was announced when there are expectations that the employment scenario will get drastically better. Organizations are getting more proactive in employing people to fill vacancies. Also, enhanced unemployment benefits are ending soon.

The number of people getting some aid under all federal schemes also decreased. It fell to 12.57 million. This was a drop of more than 1.2 million. About 33 million people were collecting benefits nearly a year ago.

Michigan saw the highest gain among states. It added a surplus of 13,000. This was when the semiconductor shortage derailed auto production. Texas had an increase of about 10,000. This is according to unadjusted data.

The increase in claims last week was a surprise. But there are growing fears over the latest Delta variant of Covid-19. Hospitalizations and case counts are rising. This is majorly among unvaccinated portions of the population. It is increasing the anticipation that another wave of the pandemic is hitting the world and the US.

Hospitalizations and new cases are nearly the same they were in mid-May. But they are now a fraction of their levels during the winter outbreak. Many factors are pointing to a high chance for labor gains shortly. This is despite the sudden increase in claims the previous week.

As of July 16, there are nearly 9.8 million job openings. This is near to the figure provided by the Labor Department. They had counted 9.48 million workers as unemployed through June. This represented plenty of chances for aggressive hiring in the coming times.

Companies shut down during the pandemic also are reopening at rapid speed. 60,502 businesses reopened in the April-to-June period. This is the highest volume of the past year. Just in April, there were 38,725 reopenings. This is the fastest monthly speed since May 2020.

Retail businesses and restaurants make up the highest part of those returns. In the second-quarter period, there was a surplus of 36,000. The Labor Department's weekly jobless claims report shows that more citizens are getting back to work. This is a trend that will make for a good July employment report.

According to Christopher Rupkey, Chief Economist at FWDBONDS, New York,

"The rise in jobless claims this week tells us that the labor market's troubles are not completely behind us, and the Delta variant may yet throw a monkey wrench into the economic recovery from the shortest recession in American history."

For the week ended July 17, initial claims for state unemployment benefits increased. They increased to a seasonally adjusted 419,000. This was a jump of 51,000. It is the highest mark since mid-May. Data for the prior week was revised as well. It now shows 8,000 extra applications received than last reported. 350,000 applications for the latest week had been forecast by economists.

There were big jumps in filings in Texas, Missouri, Michigan, and Kentucky. Several of these states have seen a surge in new COVID-19 cases.

Economists are not predicting large-scale business shutdowns as it was seen in 2020. But this wave of infections put the economy at risk. The business cycle dating committee of the National Bureau of Economic Research has said that the pandemic recession ended in April 2021. According to them, it started in February 2020.

Several of the rises in claims show complexities in smoothing the data for seasonal fluctuations. This is due to the upheaval from the coronavirus. Layoffs are typically expected to decrease in the latter half of July in average years. Summer factory closures were usual in early July before the pandemic. This was especially true for the automobile industry.

The four-week average of claims is seen as a better measure of the trends in the labor market. It takes out weekly volatility from the data. The average increased to 385,250. This was an increase of only 750.

According to Anu Gaggar, Senior Global Investment Analyst at Commonwealth Financial Network in Waltham, Massachusetts, "we need to filter the noise in the data points and not lose sight of the big picture, which is that the trend line continues to head lower. There has been some distortion in data and in consensus expectations around automakers' annual retooling shutdowns that will work its way through the system in the upcoming weeks."

Claims have decreased from a record 6.149 million, which was seen in early April 2020. But they remain above the 200,000-250,000 range. Healthy labor market conditions dictate that the level stays in this particular range.

After four straight monthly declines, other data showed a rebound in sales of pre-owned homes in June. The pace was medium. Low inventory and higher prices remain constraints.

Results on Wall Street were mixed. The dollar was little changed. US Treasuries were higher.

The period surveyed by last week's claims data was when the US government surveyed companies for the nonfarm payrolls component. Between the June and July survey periods, claims were little changed. After adding 583,000 jobs in May, the economy added 850,000 in June.

The total employment is 6.8 million jobs below the peak of February 2020. Claims data have also been muddied. This is due to the federal government's expansion of benefits. It is now being provided to citizens who are not qualified for the regular state programs. To determine eligibility for federal benefits, citizens usually have to apply for state programs.

Nearly 20 Republican-led states have opted out of the government-funded unemployment programs. This includes a $300 weekly payment. Companies said this was encouraging unemployed citizens not to venture out to work. At the end of May, there were a record 9.2 million job openings.

It is still to be seen whether job searches will be encouraged with the early elimination of federal benefits. The benefits started on June 12 and will end on July 31. For the rest of the nation, the extended benefits will lapse on September 6.

According to Nancy Vanden Houten, lead US economist at Oxford Economics, New York, "we expect the downward trend in continuing jobless claims will gather momentum as top-off benefits end in all states in early September and other constraints on labor supply including lack of childcare, recede. The latest surge in coronavirus cases may make some individuals more reluctant to return to work, however."

According to Andrew Stettner, Senior Fellow at The Century Foundation,

"businesses in hard-hit areas could be forced to curtail operations and shed positions if new restrictions are needed. What will happen to the nearly four million workers whose unemployment benefits have been cut off early?"

Nearly 12.6 million citizens were getting benefits under all schemes in early July. This is a decrease from 1.263 million in late June. The latest jump in COVID-19 infections will make critics take a swipe at the states that have ended their federal unemployment benefits.

The unemployed citizens are gradually returning to work. The continuing jobless claims stats show that the number of citizens who are getting unemployment aid is now 3.236 million. This is the lowest level since the pandemic started.

The continuing jobless claims have been decreasing since late June. Next week's data will shed more light on how employment has fared in July.